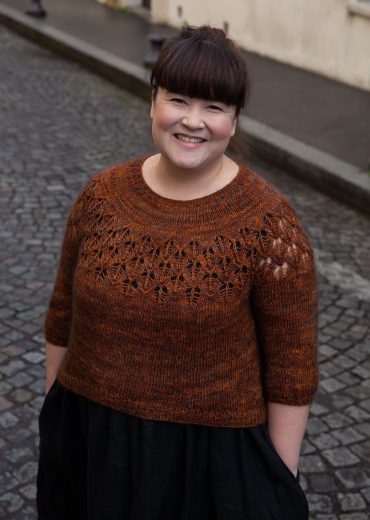 Aimée is a Korean-American living in Paris, France. She can often be seen riding around the city on her yellow bicycle with a basket full of yarn and groceries—sometimes a ball of yarn trailing behind her! Though she learned to knit as a child, she thinks she officially became a knitter when her mother died. Knitting saved Aimée from grief, depression, and solitude; it helped her find herself again and surrounded her with like-minded individuals. She felt fully embraced by the knitting community in her lowest time, and she will never forget that. It is from the love for this craft and community that she started the first knit cafe in Paris called L’OisiveThé. Since 2008, she has hosted knitters from all over world at her weekly knit night.
Her shop is a safe haven for crafters of all backgrounds. In 2015, she started her own yarn company, La Bien Aimée.

Aimée lives in Paris with her husband, Julien, and their two lovely children, Maximilien & Alixe.