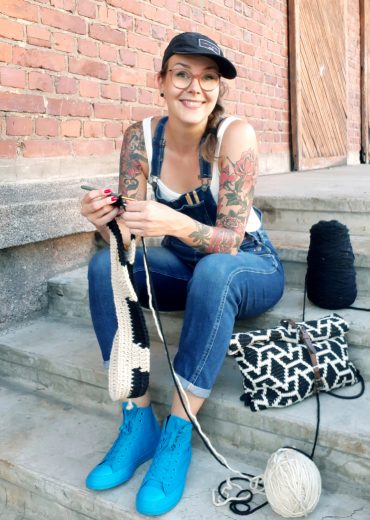 The pioneer of modern crochet, Molla Mills, is a Finnish author and a designer. After three successful crochet books the title is well earned. Molla herself would simply like to be called a cowgirl, she was born and raised in the countryside of Western Finland, in a town called Kurikka. But due to her allergy to cows, she is happy with being called the queen of crochet.

Molla found the world of handicrafts when she was a kid. Her carpenter father showed her how to do woodwork, and her mother, who made all kinds of crafts from upcycling to bead work, let Molla use her sewing machine to make clothes at the age of 13. Molla’s grandma, a very talented seamstress, always made sure that the seams were straight in Molla’s self made creations. Being surrounded by DIY lifestyle the future was clear; Molla had to learn more, make more and eventually teach all this to others.

Today Molla is fully employed by her passion. Having her own series of books, a yarn brand and followers all over the world, Molla is crocheting her way to become a world famous craftswoman.